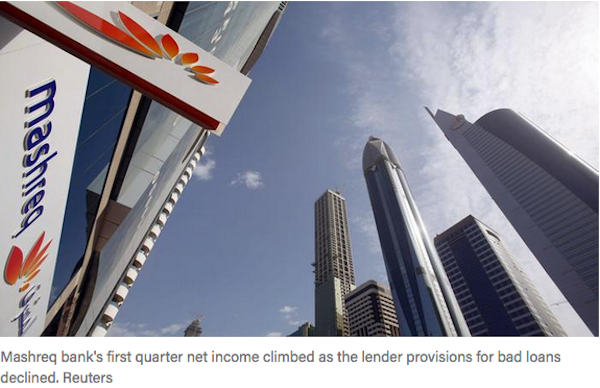 Mashreq Bank will pare down the number of its branches to 27 by the first half of 2019 and expect tech spending to go beyond the Dh500 million allocated for the next five years, executives said.

“We don’t know what technology is going to come in the next five years but what we know we have to keep updating our technology so there’s no option for us,” Mashreq Bank chief executive Abdul Aziz Al Ghurair said when asked if the bank would continue spending on tech after five years on Tuesday.

Mashreq said last month it will spend at least Dh500m over the next five years on digitisation, as it plans to shut half of its branches in the UAE this year.

Like their global peers, banks across the Arabian Gulf states are investing in digitising their operations and moving away from the traditional brick-and-mortar business model. Mashreq’s strategy is in line with a growing trend in the financial industry because large branch networks are expensive to operate and maintain.

Subroto Som, executive vice president and head of retail banking group at Mashreq Bank, said the lender is still on track to spend the Dh500m in the next five years and this would go into physical transformation, technology, machines and software, people and digital marketing. So far the bank has prioritised spending on refurbishing the branches, investing in new technology and getting new people and training existing people to do new activities.

The newly “transformed” branches differ from traditional branches in that they are an open-plan layout where self-service is an integral part of the branch. They also have more machines offering different types of banking services and universal bankers that approach customers and provide a human touch point.

The bank is investing heavily in digital capabilities such as mobile banking, including their Snapp mobile banking app, as it seeks to improve customer experience and stay up-to-date with today’s changing customer needs. Furthermore, Mashreq NEO, its digital bank, has seen exponential growth since its launch in October 2017, and is currently registering more than 10,000 new accounts a month.

“We could see our branch traffic was falling as customers were doing their banking activities on ATMs, mobiles or online,” Mr Som said.

While there will be shift in the work Mashreq staff will be doing in the transformed bank, Mr Som said the universal banker model was an opportunity to retain and retrain existing talent.

“There will be displacement of people in old roles but many new roles are coming up and many of our people will be retrained to do the new roles so there should be a insignificant change in the number of people employed, the changes will be in what they do and how they do it," he said.